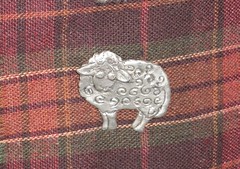 Over the weekend, Ariesna and I met a bunch of friends at the Amana Ren Faire for an afternoon of frivolity. Overall, the faire was… decent. A few interesting vendors were there, notably: The Scots Dragon, Noble Bee Honey and the Royal Chocolatier1. On the down side, the Roast Beast sandwich from previous years had been replaced with something… else. I don’t recall what the faire folk called it, but I called it crap. It was an extremely fatty beef sandwich of some sort and throughly nasty. If more places at the faire accepted the dominon of Lady Visa, I probably would have chucked the sandwich and gotten something else. I saw a few things in the merchants’ tents that I wouldn’t have minded bringing home, but nothing in my price range. We wandered the faire with Cath and Bryon. And Laura when she eventually showed up. We watched some of the shows, though most were very lame. The joust was the highlight of the shows we watched, though it wasn’t one of the better performances I’ve seen of the joust at this faire. Later in the afternoon of the Amana Ren Faire Laura, Michelle & and I were sitting at some tables. We noticed some loose cash lying on the ground under a man wearing a fantastic Scottish outfit (see Ren Faire Attendees). Laura pointed out the loose cash to him. He thanked her and then came over to chat with us. It turns out he actually is Scottish (from Inverness) and was visting family in the area. He pointed out this pin on the edge of his kilt. He joked in Scotland, sheep are more than just a hobby. *Heh* He was a really nice guy, though with his accent2 and all the noise, I had a hard time understanding everything he said. And I’m not just saying he was nice due to the whee nip off his flask that he offered me. Though it certainly didn’t hurt my opinion of him either. 😀

Update: I forgot to mention, you can view some of my other photos of the day in my photo gallery under Ren Faire.

1 Man that was some seriously good chocolate!
2 Mind you, the Scottish accent is fabulous to hear. Just sometimes hard to understand. Especially with bouncing, screaming children nearby.