I recently went on a vacation with friend down to Universal Orlando with some friends. We went in part to see the new Wizarding World of Harry Potter section which opened this summer. This was my first time going to a major theme park, so below are some tips and comments from my vacation.

About the Rides and Shows

As Universal Orlando is divided into 2 separate parks, I’ve separated my comments about each ride and show into their individual parks. 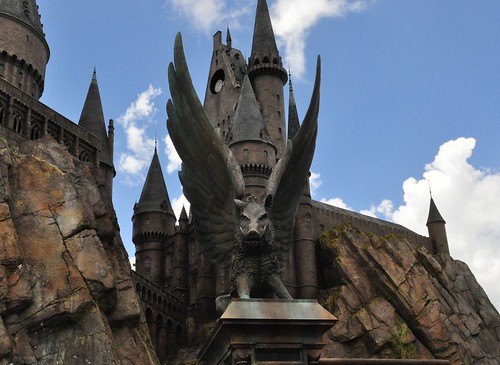 As this section is so new and its opening was a major influence on our deciding to go this summer, it gets a bit more coverage than the rest.

Update 2010-08-16: Doh! I can’t believe I forgot to mention Butterbeer & Pumpkin Juice. These are 2 speciality drinks only available within the Wizarding World of Harry Potter. Butterbear is a rather sugary cream soda with a non-dairy, butterscotch flavored whipped topping “head”. If you don’t buy it in the plastic, collector’s mug; it cost something like $3.50 a glass. I’d say it’s worth having at least once, but it’s so very sugary that I wouldn’t go for a second cup. Pumpkin juice is similar to a homemade apple cider, but with pumpkin pie like flavorings. It was good; but…. At $6.50 a bottle, it’s not something I could see drinking much of.