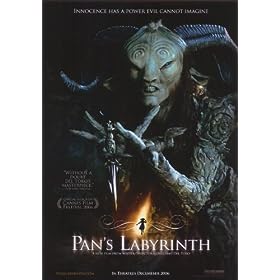 A dark, brutal and depressing movie that touches the heart. Pan’s Labyrinth was imported form Spanish (original title: El laberinto del fauno) and is a modern fairy tale. Don’t let that fairy tale description fool you, this is no film for young children. The setting is somewhere in the countryside of Spain, 1944. Ofelia is a young child who dreams of fairies as she goes with her pregnant mother to meet her new stepfather. Her stepfather is a ruthless captain in the Spanish army who works to put some a rebellion in the region.

Pukka’s Links of the Week

No links from other sources this week.

Don’t take away my fansubs!

I’m a bit of an anime fan. I’ve bought many a VHS tape, Laser Disc and DVD in my time and I plan to buy many more… unless the anime studios shutdown the fansubbers. For those of you who might not be familiar with the world of fansubs; here’s the definition of a fansub from Wikipedia:

Fansub – short for “fan subtitled”; a copy of a foreign movie or television show (most often anime) which has been subtitled by “fans” into their native language. This has been done to provide shows that would otherwise be unavailable in one’s native language, but with the growth in the popularity of anime, fansubs’ purpose has expanded to include programs that would be commercially unviable (I.e. older or niche appeal market titles.) in one’s country or simply to reduce the amount of time one would wait to see a particular program. Also, many American anime viewers feel there is too much censorship of anime broadcast on TV, especially in scenes related to nudity, which is common in Japan (even in children’s shows) but is typically considered inappropriate in the United States.

I mostly get my fansubs from online sources via BitTorrent1. This allows me to:

Given that I quite often am not fond of the “mainstream” anime that is brought over and that my budget is limited; being able to view the series completely via fansubs is a vital part of my process for deciding what series I will buy. If the anime studios force the fansubbers to stop their work; then I’ll be forced to spend my money elsewhere. Harsh, but I’ve already bought my share of crappy anime and I’m not willing to shell out ~$20/disc in the hopes that a given series won’t suck.

Oh and in case you were curious, this article over on C|Net prompted my post.

1 If you’re interested in more info on this; leave a comment and I’ll see about writing something up.

Review: Ghosts in the Snow

A while back on the advice of AWelkin, I picked up a copy of Ghosts in the Snow. I read it, loved it, got distracted and never wrote up any kind of review. A couple of weeks later, I read again. I still loved it but I still didn’t write up a review of it. Sometimes, life just works against you. *sigh*

I think the best description of Ghosts in the Snow, by Tamara Siler Jones, that I’ve heard is “forensic fantasy”. It’s got ghosts, magical items, foreign religions and gruesome murders. Dubric Bryerly is the Castellan1 of Castle Faldorrah and it is his duty to keep the peace. Recently, a serial killer has been stalking serving maids and killing them, one after another. The troubling part for everyone is that no one has seen the killer. The real trouble for Dubric is the ghosts of the slain are haunting him.
END_OF_DOCUMENT_TOKEN_TO_BE_REPLACED

I’ve seen this meme in several different places. I finally decided to heck with it and that I’d do it myself. The items in bold are the ones I’ve done and the rest are viewable after the jump.

01. Bought everyone in the pub a drink
02. Swam with wild dolphins
03. Climbed a mountain
04. Taken a Ferrari for a test drive
05. Been inside the Great Pyramid
06. Held a tarantula.
07. Taken a candlelit bath with someone
08. Said “I love you” and meant it
09. Hugged a tree
10. Done a striptease
END_OF_DOCUMENT_TOKEN_TO_BE_REPLACED