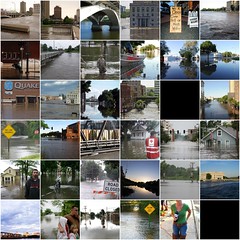 I’ve taken a few photos of the flood but not yet gotten around to pulling them off my camera. I got a bit tired of waiting to post my photos over to Flickr and I wanted to see what photos some others in the area had. So I create this mosaic of the flood photos I liked best.

I’d like to thank each of the following photographers without whom this mosaic would not have been possible:

Just to let everybody know, we’re still here and doing ok. Our house is approximately 1 mile outside of the 500 year flood plain1, so hopefully we won’t have to evacuate. Our main problem around here at the moment is a lack of usable water. The city only has one well working at the moment, so they can only output about a fourth of what they normally do. I’ve read various reports indicating it will at least a week if not more like 2 or 3 until things start returning to normal. If I get a chance to safely take any photos of the flood, I will do so. However I’m not going to run out and do that right away, as it’s both dangerous and possibly would put me in the way of safety/emergency workers. Those are the sort of people you want happy with you, so I’m not going to go out and do stupid shit to piss them off. 🙂

1 You can view the flood plain area via Google Maps.

Ever since upgrading to the latest version of Rob Miller’s Now-Reading plugin, I noticed my single book pages were working but not displaying everything correctly. Specifically books I’d marked having been borrowed from my local library were being displayed as:

When they should simply have a line reading “I borrowed this book from my local library”. I had spent much
time fiddling with my templates trying to figure out how the upgrade broke them and today I figured it out. The truth is my template was just fine. The problem is the newer version of Now-Reading was applying a new filter to book-meta1. That filter is wpautop and it was wrapping my variable in <p> … </p> tags. Those tags screwed up the display and made my variable checks fail. To correct the problem, I went into now-reading/default-filters.php and commented out add_filter('book_meta_val', 'wpautop');. Now my single book pages look like they’re supposed to again. Yeah!

1 This is a custom field available in the back-end of the plugin and it is where I store the information telling my template if I borrowed the book and from whom I borrowed it.

What a wretched, steaming pile of poo this movie was. Two thumbs all the way down. The wacky, over-the-top stupidity of the script turned what should have been a fun night at the movies into a constant groan fest as things went from bad to worse to crap. I’d been warned off the film by friends with good taste in movies, but we were heading down to the in-law’s anyway…. And while we’d been warned off we’d heard from others that the movie wasn’t too bad. Unfortunately it was worse than I’d been expecting and I knew within the first 15 minutes or so that I was going to hate the film. Near the beginning of the film, Indy & a friend are captured by the bad guys and taken to a government facility out in a desert. The bad guys do some weak exposition and we’re taken inside a warehouse. If you hadn’t realized they were at Area 51 yet, the filmmakers decided to pound the point home with a 80lb sledge by painting 51 in 2 story tall numbers on the inside of the warehouse doors.  *sigh*

And things just went downhill from there.  True there were moments in the film which were enjoyable, but they were the exceptions not the rule.  I highly recommend staying away from this wretched, steaming pile of poo.

A recent visitor to the CB pointed out a problem on some of my older entries.  It’s something I was expecting to have to fix but got sidetracked and never got around to.  Basically with the upgrade to WordPress 2.5.x, there are a couple of new settings in the wp_config.php file which have WordPress to use UTF-8 character encoding to better handle non-English langauges/characters.  However as older versions of WordPress automatically converted standard quotes/astrophes to their fancy/curly versions and those fancy versions are dependent upon which character encoding scheme they are written in.  Since I wasn’t sure how many entries I had that are affected by this and I wanted to leave the UTF-8 encoding enabled; I ran this SQL query to fix at least some of the problems: UPDATE wp_posts SET post_content = REPLACE(post_content,''','\'') WHERE post_content LIKE '%'%';

There are probably other characters I need to fix yet, so if you happen to see something like hieroglyphics on this site or other gibberish, let me know what entries you found it on so I can fix them.  And my thanks to Lynsey for prompting me to fix these entries.