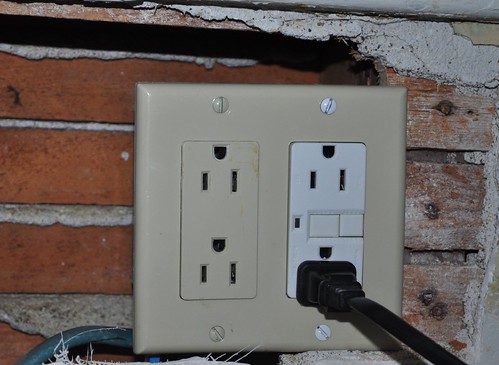 I’m not sure if the best way to describe this photo is “the joy of old houses” or K.I.S.S.

The other day my wife wanted to make some tea, so she plugged in the electric kettle[1]I used to think these were a bit silly, but now love it. While it may seem… a bit wasteful to have an electric kettle, the electric kettle heats the water in about 2 minutes (versus 5-10 for … Continue reading. Only it wouldn’t start heating and she notice the microwave’s clock when dark. We tried hitting the reset button on the outlet[2]It’s a GFCI outlet, but it didn’t help. Since it was only this one outlet that wasn’t working and there hadn’t been had any noticeable power fluctuations. So I assumed something in the outlet had gone bad. We had a replacement GFCI outlet lying around[3]From a plan to replace one in the master bath, before we realized that outlet’s cover was glued to the mirror. So we waited until today when I’d have several hours of good light to try replacing the kitchen outlet.

I screwed the junction box to the stud, hooked up the outlets, turned the power back on and …. nothing worked. We poked the reset/test switches on the outlet for a bit and still nothing happened. I went back down to the basement, confirmed all the circuits were in the on position, flipped all the circuits controlling the kitchen off/on and then suddenly we had power back to that outlet. This makes me wonder if one of the circuits had been partially tripped so that it appeared to be on, but it wasn’t letting power through. And that’s why this photo could be called K.I.S.S..