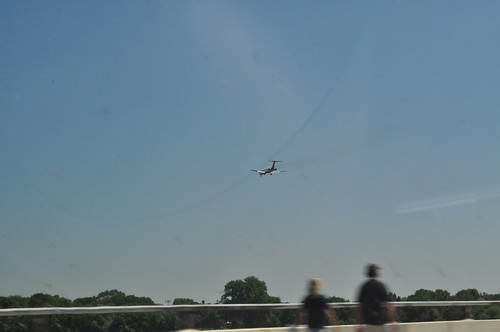 This particular photo doesn’t really meet the standards I normally set for myself, but has sufficient feature of interest to me to get posted. “Let me explain. No, there is too much. Let me sum up.” We have friends who live in Minneapolis1. We go up to visit several times a year and our route to their house takes us right past the Minneapolis airport. Frequently when we are going past the airport, planes are either coming in for a landing or just taking off and so they seem like they’re right overhead as we drive by. Several times I’ve thought it would be great to get a photo of a plane as we drive by. Unfortunately I tend to be tired and forget to have my camera out. Then the last time we were in Minneapolis, I finally remembered to have my camera out as we were leaving. Only that time there wasn’t a plane to be seen. Somewhat annoyed, I planned/hoped on getting a plane photo during my next visit. This past weekend we were up again and I tried repeatedly to get that desirable plane photo. And this time planes were relatively plentiful, but they frequently on the wrong side of the car or just too far away for the lens I’ve got or trees/buildings got in the way of the photo. The photo I’ve just posted is one of the few where I got a “clean” photo of the plane. I say “clean” because the car window was dirty and caused some reflections which distract from the photo2. Though the final thing that pushed this photo over the top into acceptable choice for me was the dichotomy of the seemingly frozen plane in midair with the people blurry with “motion” in the foreground.

1 Heya Kim & Aric!
2 These could most likely be easily fixed in Photoshop, but I don’t have Photoshop and that’s not the sort of photography work I enjoy doing.