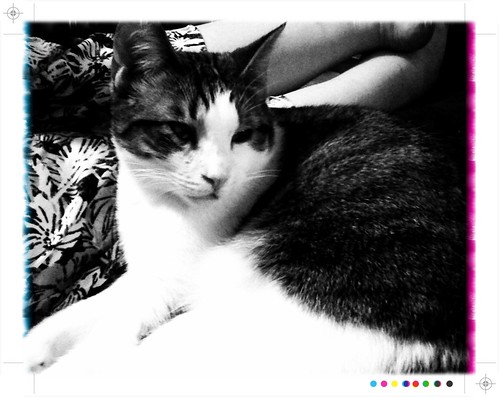 While I generally prefer to apply minimal post-processing1)Maybe some cropping or a bit of light color correction to my photos, I do admit to having some fondness for the Camera+ iPhone app. It’s got a bunch of interesting filters2)The app developers refer to these as FX Effects. builtin allowing you to easily give your photo an entirely different feel. Camera+ also has some neat exposure correction filters and some other handy things3)Though the nifty sounding Touch Exposure & Focus control is not available on my iPhone 3G (need at least a 3GS) to make it easier to take good photos. For all that I like the app, I’ve not been using it lately since it kept crashing about 10 seconds after starting it. Today I noticed there was an update available for the app, installed it and found it sees to be working again4)Hence today’s picture of Raja looking like it does. ^_^