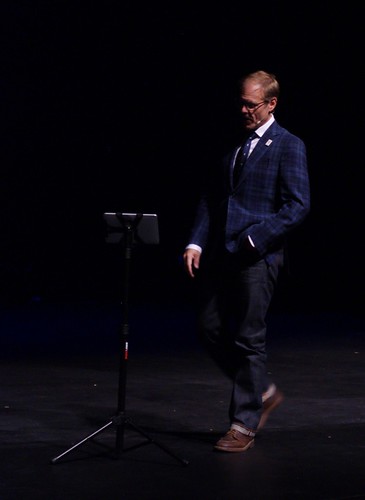 Taken during Alton Brown’s appearance at Theatre Cedar Rapids for the Cedar Rapids Public Library’s first Inside Out. As the theatre doesn’t allow for food, there was no cooking demonstration; instead the evening’s entertainment was an interactive lecture called “10 Things I’m Pretty Sure I’m Sure About Food”. Apparently Mr. Brown has given this lecture before but tweaks it each time he performs it. The 10 items in tonight’s version of the lecture were:

He also included a special bonus item, “Raisins are always optional.”
One of the questions Mr. Brown received during the evening was if we’d ever see those bits & things where he’d said that’s another episode. He corrected the questioner, telling them he’d actually used to say “That’s another show” and went on to relate how there were things he wasn’t allowed to do on Food Network.
He explained he would have loved to do an episode of Good Eats on rabbits and prepare a roast rabbit, but he wasn’t allowed to. A member of the audience shouted out soething along the files of “Why not? We’ve got Easter?”
Mr. Brown took that moment to related a story of how he’d like to do a roast rabbit with hard-boiled eggs[1]And possibly even some chocolate eggs. in for Easter, but his wife shot the idea down.