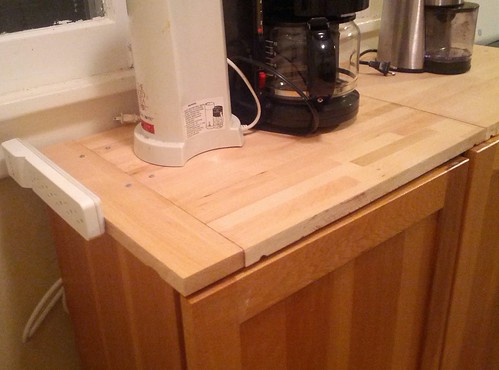 This cabinet is something we found a few months back while browsing our local ReStore. We bought it, brought it home and set it in our kitchen pantry. It’s been sitting there ever since acting as a makeshift bit of counter space. I liked it, but have had 2 problems with it. One the cabinet doors would scrap on the floor whenever they were opened; and two, it didn’t have a good top. We left the interior shelf laying across the top, but that shelf piece is really just laminated MDF and the occasional spill was starting to affect the laminate. I’d been on the lookout for a small piece of kitchen counter top or stone that could be put on the top but just wasn’t finding anything Then a few weeks ago, I ran across an article on IkeaHacker where somebody turned an cabinet into an island and I liked the idea. So on my latest trip to Minneapolis; we stopped in their Ikea and picked up the same LÄMPLIG cutting boards. We actually bought 3 of them and then decided we could use the scrap from cutting them to fit to fill in the small amount we needed on top of the cabinet; while saving the third to use as an actual cutting board. We also decided to pick up a package of CAPITA cabinet legs. Originally I thought I’d just pick up a 2×4 and build a small platform but this seemed like it would be easier and possibly a bit nicer.

I’m guessing this cabinet was originally intended to be an upper level cabinet and as part of that it had about a 3/4 inch deep “tray” on both the top and the bottom. So I cut the pine boards to fit in the space and then screwed them to the cabinet. This was to both give the cabinet a bit more stability and to give me more places to screw the cutting boards to the cabinet. Then I cut the LÄMPLIGs to fit across the top of the cabinet a bit better; using one of the scrap pieces to completely cover the top of the cabinet. I screwed it all together with the stainless steel screws I already had and laid down a bead of the clear silicone between the cutting boards[1]In hopes that the silicone will prevent any moisture from ever penetrating down into the cabinet.. I left the cabinet in our garage overnight to let the silicone cure and then this evening I mounted a power strip to the side of the cabinet and brought it inside.

Now our new kitchen “island” is complete! It’s not quite as stable on the new legs as I would like[2]I might end up looking into permanently attaching it the wall to fix that./ and my cuts were not as straight/smooth as I would have liked. But given this was thrown together in just a couple of hours and with only a minor set of tools (a couple of saw horses, clamps and a basic set of Ryobi cordless tools); I don’t think it turned out too badly. 🙂