Sometimes, I feel the need to talk about me (imagine that).

For want of a sink that does not leak, we called the plumber.

For want of turning off the water, the plumber found the shutoff valve did leak.

For want of fixing the shutoff valve, the city was called.

For want of the city testing the external shutoff valve, they found it would not turn.

For want of a working external shutoff valve, the city did this…

Edge of the Pit

Depths of the Pit

To make a short story longer:

Hence, my coming home to the pictures above. From what Michelle tells me, the city will be back tomorrow to finish fixing the external shutoff valve. Then we have to wait until next week to get the repairs done inside the house.

#PMJTour is a live performance by Scott Bradlee’s Postmodern Jukebox and to paraphrase Ferris Bueller….

It is so choice. If you have the means, I highly recommend picking up tickets.

Does it say more about me or more about my co-workers that an opened, and not quite full, bottle of scotch could sit on my desk all day without a single comment? 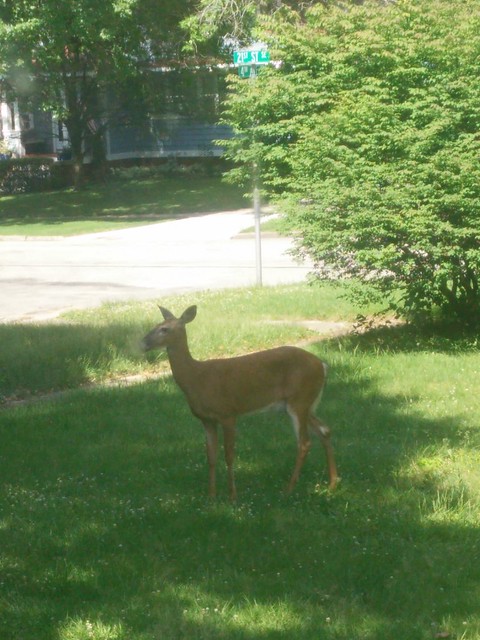 We live in town and not really near any woods, but when I looked up from my book Sunday afternoon this critter was running around or yard.

After a very busy spring at work and busting my brain far too much, I decided to finally take some time off. Not having the funds to go on a cruise or jetting around the globe, my plan has been to stay home and just chill. Maybe catch up on my podcast listening, maybe play some video games, and definitely do some more reading. Oh yeah, and maybe work on a couple of house projects I’ve been meaning to do for a while.

In regards to task 5, mostly hidden by our microwave (next to the outlet) is a small hole in the wall. As that outlet has always been a bit awkward to use (cords on the counter); I’d found a recessed outlet box online that I’d hoped to replace the existing one with and then planned to patch the hole next to the outlet with some scrap drywall we still have sitting around from this old project[2]Wow, I hadn’t realized that was 5 years ago now. Apparently we need to go through and get rid of old scraps more often (or do something with them anyway). I’d done some measuring and was sure the new box would fit… until I actually tried to put it into place. While the wall space is deep enough to fit the box, due to trim work and the back of the counter; I can’t get the new box in there. For extra fun the bit of wood I can see in the wall and had planned to attached my drywall scrap to fill the hole is apparently only barely held in place by a single nail. When I pushed my drywall scrap up against it to try drilling pilot holes for the drywall screws; it felt like I was about to pull the wood out of the wall. *sigh* So I closed the hole up best I could and hid it once again behind the microwave. We’ll have to save our pennies and maybe someday completely gut/redo the kitchen. Till then, that hole well it’ll be our little secret. One the bright side I was able to attach the existing outlet box more securely in place, so at least it doesn’t wiggle any more.