As previously mentioned, Ariesna & I have been sick for a bit over a week now. So today, instead of taking a “romantic cooking” class through NewPi like we’d been planning; we got a trip to the doctor’s office. Whee…. For extra fun, we each got a Zpak1. I guess that’s a lot better for us than a box of chocolates, but it’s nowhere near as much fun. Still, as I told Ariesna earlier; it’s been a real pill of a day.

I’ve been under the weather for about a week now. I think I’m just about over this flu crap and will be back to posting slightly more regularly soon.

I’ve been home sick the last couple of days and today while I felt mostly felt fine; I was running a bit of a temp. I couldn’t sleep so to entertain myself; I surfed the web and found this links which amused me.

*blech* I hate being sick. Sure, it’s paid time off from work (121.5 hours of sick time remaining) but I’d rather be feeling good and taking vacation time. I am mostly over the bug I’d caught, but still feeling a bit congested. That being the case, I’m skipping coffee today in favor of hot tea1. This being Wednesday, my preference for tea caused a bit of confusion.

Let me ‘splain. No, there is too much. Let me sum up. Buttercup is marry’ Humperdinck in a little less than half an hour. And every Wednesday, myself and a few co-workers head over to the Terrapin to get a cup of real coffee2. Almost without fail, I order a “Grand Canyon” which is 2 shots of espresso, steamed milk, a shot of dark chocolate syrup and a shot of mango syrup. *yum* When I got there today, I picked up their tea menu and Rob (one of the owners) ordered me to put it down. I explained about the congestion and he accepted it, but I wouldn’t say he was happy about it. Then I ordered their Chinese Breakfast tea, as the description sounded similar to the yunnan jig tea I’ve mentioned before. Hot caffeinated beverages acquired, we headed back to the office and I headed back to the mountain of email that had arrived while I’d been out. After clearing out that mess (most of it went straight to the trash), I started/continued testing a problem I’d been working on Friday. I’m still processing the data for that test now, but I’m also starting to wonder if I should have stayed home again.

Today, like Sunday, I woke up feeling better than the day before. The problem is like Sunday, I didn’t stay home. Sunday, Ariesna & I were invited to go to Niabi Zoo over in Illinois with some of her family. It was a fun day and I took quite a few pictures3 but by the end of the day, I was totally wiped out and realized I should have stayed home. Now I’m not wiped out (so far) but I do feel more tired than I should from just sitting at a desk, staring at a computer screen. Ah well, not much I can do about that now.

BTW, last night I upgraded Cath‘s site to the current version of WordPress. I was kind of annoyed at how long it took but then most of that time was taken up my crappy ftp client having problems deleting the files for the old version from the webserver. Mind you I was booted into Windows at the time4 which undoubtably was part of the problem. But I did eventually get it done and wouldn’t you know it looks nearly identical to what it did before. I’d call that a good sign for a seamless upgrade, but I’m waiting to hear back from her before I call it a success. So why the upgrade? In part to patch some old security holes and in part because all the new/interesting stuff for WP is happening on the newer versions. This way if she feels like going out and picking a different theme5; it should be trivial to install it.

Anyway, one of the reasons I was annoyed with the amount of time it took was last night also happened to be the season premier for NCIS. I’ve been a fan of this show for a while now, but season 2’s finale was murder. Quite literally, as they killed off one of the NCIS agents. I was very much looking forward to seeing where they’d take the show next, but with upgrading the site and some other things I didn’t get to watch the show as thoroughly as I would have liked. From what I did see, I’m not sure how enjoyable season 3 will be. I don’t care for the new characters they introduced into the NCIS office (Director Jenny Shepard and Agent Ziva David). The romatic background between Gibbs & Shepard could be an interesting subplot but they seem to be pushing it too hard in an episode which should be dealing more directly with the remaining NCIS agents working to find Kate’s killer. And then to make the episode a 2-parter leaving us on another cliff-hanger is distinctly annoying. *sigh* I guess we’ll have to wait and see if they can pull this up with next week’s episode.

1 Next to chicken noodle soup, hot tea works best for clearing up congestion and helping me feel better.
2 The first part of this paragraph is a quote from The Princess Bride. And when I say coffee, I mean flavored espresso.
3 I’ll see about posting some of them later. Incidentally, there was a classic car show being held on the zoo’s premises so don’t be surprised if you see more car than animals photos.
4 I had some work to do that required M$ Word, as OpenOffice Writer couldn’t properly edit the fancy formating in the document (originally created in M$ Word).
5 By perhaps looking through the themes in Alex King’s Theme Browser…. 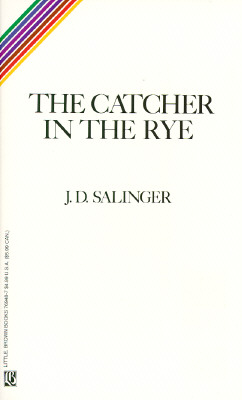 You’re The Catcher in the Rye!
by J.D. Salinger
You are surrounded by phonies, and boy are you sick of them! In an ongoing struggle to search for a land without phonies, you end up running away from everything, from school to consequences. In this process, you reveal that many people in your life have suffered torments and all you really want to do is catch them as they fall. Perhaps using a baseball mitt. Your biggest fans are infamous psychotics.
Take the Book Quiz at the Blue Pyramid.