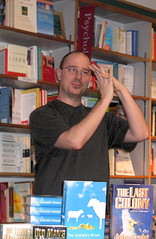 Tonight, John Scalzi made a stop at the Prairie Lights bookstore in Iowa City, IA for his book tour to promote The Last Colony. Michelle & I got there wicked early1 and chatted with a couple of store employees briefly. Fortunately, they were cool with me bringing in my own copy of The Android’s Dream to get it signed. *whew*

Then while we were looking around the shelves near the area for the reading, they said we could go ahead and purchase a copy of The Last Colony while we were waiting so we wouldn’t have to wait in line later. Schweet. Then I noticed they had copies of The Sagan Diary. I was most pleased by this as I was a bit strapped for cash when the pre-orders were announced for it on Mr. Scalzi’s blog and I’d heard the complete print run had sold out. Naturally, I grabbed one of the 3 copies they had left. 😀 Then we went into the coffee shop3 and grabbed a drink. I had their cafe mocha, while Michelle had a brewed butterscotch toffee coffee, which she promptly ruined by using soy milk for a creamer and adding sugar to it. Then we went back over to the reading area and found Mr. Scalzi had arrived. He was chatting with the few members of the audience4 and with the various members of the staff.
As Mr. Scalzi’s visit happened to be part of the Live from Prairie Lights. This is a local radio program that is recorded live and then later played back on a local radio station, as well as the UofI‘s school/public access TV channel. So he also spent some time talking to the host of the program prepping for the show.

Then just before the show began, he addressed the audience letting us know he’d start off by reading the first chapter of The Last Colony, go into a Q&A session and then he’d be happy to pose for photos. Naturally, that’s when I decided to snap a quick shot. Heh. I also took a couple of photos later, but they weren’t as amusing as this one so they’ll remain offline for now. The reading and Q&A were quite fun to listen to. Not being a writer, I didn’t join in and ask any questions (plus my caffeine buzz was wearing off). After the recording was over, Mr. Scalzi kindly offered to sign any books people had. I quickly stepped into line with my brand-new copy of The Last Colony — specifically purchased at Prairie Lights this very evening to support them, since they brought Mr. Scalzi in for us — and my slightly dog-earred copy of The Android’s Dream.

Side note: Yes, I realize this entry is rather disjumbled. This is partly explained by me having a caffeine-crash headache, partly by me staying up till 1AMish to write it and partly by me just not being a writer.
Side note 2: The quickie post following this will explain part of why the heck I’m still up writing this.

1 Mostly due to somebody’s lead foot2.
2 Said lead foot was not a Men’s size 13.
3 In his opinion on coffee, Mr. Scalzi is quite wrong. Coffee (especially good coffee) does not taste like ass.
4 Around this time, Michelle mentioned to him The Android’s Dream was her favorite book and he said it was his as well.