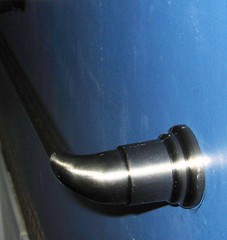 It was another long, dull morning at the office. Fortunately, the afternoon proved to be quite a bit more interesting. While I was examining an issue reported by one of our beta users; I heard some shouting about a fire from one end of the building. Popping my head up like a good, office gopher; I saw some people rushing about, the overhead lights that was were off and the safety lights were on. Shortly after that I was told a fan in one of the bathrooms had caught on fire, burning/melting some of the plastic of the fan. There was only a little bit of smoke right then and the fire had been put out so I went back to work. Then the smoke got worse and I stood with some co-workers near an exit with the door open to the outside for fresh air. We stayed inside as it had also just started to rain. A few minutes later, we heard sirens and were told to either go to the top floor of the building or outside. I opted to stand outside. After we were out there for something like 20 minutes; we were told to go home for the day. Which was a sweet 90 minutes early, but I had a fearsome headache presumably from the chemical fumes off the burning plastic. What a day.

Banana, Crackers and Gatorade… Oh my!

Well, I finally feel like I am at least partly back from the dead. But really, that’s getting ahead of myself; allow me to backtrack a bit.

2005. May. 7th. Ariesna and I were joined in wedded bliss. Unfortunately with her just finishing her degree and paying for a wedding money was tight so we didn’t have the cash to go some place exotic and we couldn’t really afford to spend more than a night away. So I picked a B&B just a few hours drive away. A helpful friend had recommended it as the most romantic B&B in the area. After the ceremony & reception, we drove out and enjoyed our one night there.

2006. Ariesna and I went back to the same B&B for an entire weekend. We ate out at a couple of nice restaurants, did a little shopping and hit up an art museum while we were there. It was a grand time, but by the end of it we were both tired. We got home, chilled for a while and eventually went to bed. Blissful slumber was interrupted at 4:30 AM by me waking up feeling like I was choking and/or drowning. I ran into the bathroom and spent the next 15 minutes or so kneeling in front of the porcelain throne. After getting myself cleaned up, I tried going back to bed but woke up a while later with the same problem. Again, I eventually got cleaned up and tried going back to bed. Later, I got the intense fun of making a trip to the doctor on what was supposed to be the last day of my vacation. I got weighed1, poked, prodded and a q-tip was shoved down my throat2. The doctor confirmed I had the flu combined with a sinus infection. However he was worried that I was severely dehydrated and wanted to put me on an IV to get some fluids in me. Alas after much poking (in both arms), they realized I was too dehydrated for the needle to go in properly. Eventually, they gave up on the IV and let Ariesna take me home. Though they did tell her to keep pushing fluids down me and recommended she get me to drink 2 liters of gatorade that day and keep pushing the fluids at me the next. She did so, continually waking me up from some of the best sleep I’ve ever had to drink, drink drink. And I don’t even like gatorade! *sigh* I mean the fruit punch version isn’t too bad but the rest…. yeck.

Anyhoo, I ended up spending the entire week home sick and now the night before I finally go back to the office I am feeling much better. I’m just not at 100% yet. My sinuses throb (and continually drain down my throat) and on top of that I’ve got an evening cough3 which feels like it’s going to rip my throat in half. But I’m still taking the anti-biotics the doctor prescribed and I’m hoping when the pills are gone so will be the last of my health problems.

Oh yeah, if you’re wondering about the title on this post that’s pretty much all the food I’ve eaten in the last week. It’s been thrilling. 🙁

1 No, I’m not repeating what that lying hunk of metal claimed was my weight.
2 Apparently, that’s part of the test for strep throat. Only nobody warned me in advance. Incidentally, the test came back negative but it has a 15% chance of failure.
3 It only happens after 5. No idea on why that is, but there you have it.

One of the new books I picked up recently was Just A Geek by Wil Wheaton. I’ve been reading his blog for a while now and really been enjoying it. So when I last was hitting up Amazon.com for something to read; I decided to get a copy of his book. Currently, I’m 16 pages into and I ran across a line that was just so damn funny that I had to set the book aside or risk tearing it up while I was laughing on the couch. That line is….

If you ever get a chance to pee next to a rock star, make sure you do it.

While peeing next to Billy Idol would certainly be a moment to remember; given my druthers, I’d rather be standing next to Rick Nielsen of Cheap Trick fame. *shrug* He’s got better guitars and I like Cheap Trick’s music better. So my faithful CoffeeBear.net readers, which rockstar would you like to be standing share a restroom with?

Today we went to Kyoto. We’d been warned that it was one of the hottest places in Japan, but I hadn’t paid too much attention to the warnings thinking that I wouldn’t really notice the difference after the heat I’d already been dealing with. Boy was I ever wrong! It was the single most brutal day of heat and misery that I’ve ever experienced. It wouldn’t have been so bad if I’d been wearing shorts, but AWelkin had mentioned prior to the trip that it was one of the more conservative areas of Japan and we shouldn’t wear shorts there because it’s just not done1. I have to say that if I’d known in advance how brutal the heat would be there; I would have ignored that cultural advice and worn shorts. It was horrific and it make matters worse, the main temple we’d come to see was more than just a little ways from the train station and all the walking was uphill. Before we got there though, we rode the local bus system which wasn’t too bad, except when it got crowded2. Once the bus desposited us at the base of the hill to the temple; we started the climb, ignoring all the shops on the way up. When we finally made it to the top of the hill; we found we had to go up a set of steep stairs to get to the actual temple area. I think we’d already visited another temple that day (I’ll have to go through all the tickets and scraps I saved from the trip to double-check) and so AWelkin allowed those students who wanted to; to rest at the base of the temples. Only about 5 of us (3, if you didn’t count AWelkin & Bryon) actually went in. It was the most beautiful temple we’d seen yet and had a view of the valley area below which rivalled (but didn’t quite beat) the view of the ocean at the one previous temple. Again, words fail me here so I’ll have to hurry up and see about posting some pictures.
END_OF_DOCUMENT_TOKEN_TO_BE_REPLACED