Bit behind on the old blogging, so here’s all the news fit to print… Or something like that. Generally I try to post about pleasant subjects but events of late have not been conducive to doing so, but I am trying to post more this year so bear with me.

Picked up Guitar Hero World Tour (Wii Edition) the other day. I’ve played some of the previous Guitar Hero games but hadn’t purchased any of them until now. Then Amazon had a lightning deal on it and I was able to pick it up for $60 (vs the normal $100). Talked about it with my supervisor at work and she made the interesting comment of comparing the concept of Guitar Hero to Simon. Now that I wrote that I’m not sure why I found it so amusing or apt, but I did. *shrug* In any case, I’ve been having a lot of fun with it. We did try picking up a second controller for the game, so the wife and I could play the game together but most places around us are sold out currently. One of the used, game shops had a used controller but it was missing the plastic cover which holds the Wiimote inside the controller. Meh.

Yesterday our failing US economy hit home a bit more directly. The company I work for announced all employees will be taking a 8.33% paycut effective April 1 through at least June 30th and if that wasn’t bad enough we all have to take 1 week off without pay. Either one of those is bad enough but both at once really hurts. Especially since that paycut effectively wipes out 2+ years of raises. I’m trying to be positive about it (e.g. I’m still employed and I’ll get a week to do some work around the house) but that’s hard when you see new reports indicating the company’s board of directors paid themselves 2 million dollars in bonuses and changed the rules on their bonuses so they could take the entire bonus in cash1. *sigh* The situation blows away all our plans for having fun this summer and kills any plans we had for painting the house this year. Epic suck.

1 In previous years, they were required to take a minimum 25% of their bonus in company stock. Rather disheartening to have them grabbing all that cash for themselves while they cut our pay. 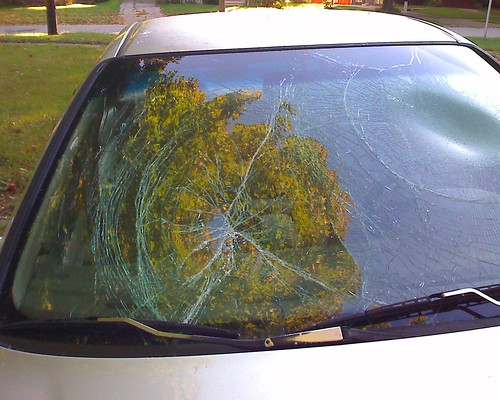 Look at what fun somebody had during the night.  Yup, that’s how I found my car when I walked outside this morning to go to work.  When I first saw the damage, I was sleepy enough to think I had frost on my window and I’d have to scrap it.  But before I could even start thinking about how odd that was I’d gotten close enough to realize it wasn’t frost on the window.  *sigh*

Like others in this thread, I didn’t care for the camera shake. It wasn’t bad enough to make me leave the theater but it definitely made me queasy. As for the storyline to the movie…. meh. While most of the characters had a good line or two; I didn’t them. Any of them. In fact, I would go so far as to say my main complaint with the movie is one of them might have survived. I would have preferred a clean sweep of character deaths.

In response to the Cloverfield thread on the Whateveresque forums.

Recently, my wife asked me to swing by the pet store and pick up some cat food. I did so after work and then stopped at a nearby convienence store to both fill up my gas tank and get something to drink. Desiring something that was not loaded down with sugar or the American favorite “high fructose corn syrup”, I checked out the cold cases and found I had 2 options: plain water or Lipton Unsweetened Iced Tea. Seeing how it was late in the day and I have feeling tired, I picked the caffinated option. Dear god, I wish now I had choosen to stick with water.

The marketing blurb on the side of the bottle claims you brew tea straight from hand-selected tea leaves. If that blurb is accurate then the people you have hand selecting the leaves must be sadistic, tea-hating bastards who desire to inflict maximum pain and suffering on their fellow man. But then if one continues reading the information printed on the bottle’s label; one will find you feel the need to add citric acid (for tartness) and caramel color. That kind of blows away the theory that they’re really hand selecting the tea leaves for their customer’s pleasure. I mean if you were hand selecting good leaves to make tea for the consumer then why do you feel the need to put additives in the tea? After all Ito En is capable of making an entire line of bottled teas containing nothing but water and tea2 without coloring?

I’ll grant that Ito En is brewing green teas, not black. However since you do not appear to produce an unsweated green iced tea; I cannot make a direct comparison. Still this bottle of your tea was easily the worst tea I have ever had3. Hell, even Nestea was better than this! Until you learn how to brew some proper tea, perhaps you should take this crap off the market.

1 If you carefully read all the text on one of their bottles, you’ll see Lipton Tea produces their Iced Teas in cooperation with Pepsi and that they are a Unilever brand.
2 I had to change my argument slightly as after checking a bottle I’d not thrown out yet, I found Ito En adds Vitamin C to their tea.
3 Yeah, I drank it all. I was hot, thirsty and had to drive home yet.

I confess. I’m a technophile. I like reading about new technologies and gadgets. Even better, I like owning new technologies and gadgets. And yet, I don’t have a cellphone of my own. I bought one for my wife but that was only because she was doing a lot of driving out into the boonies of Iowa as part of her degree program. The phone is a couple of years old now but I’m in no hurry to replace it. I’m in even less of a hurry to get one for myself.

Why? Because every cellphone I see out there sucks. The cellphone manufacturers are rushing to build in all sorts of extraneous functionality. This adds to the phone’s weight, size & complexity without providing any meaningful benefit.

Let’s look at a similar product for a moment, the iPod. In a field of hundreds, if not thousands, of MP3 players the iPod is the industry leader and it has the least functionality of the lot. While the other manufacturers have added FM tuners and recorders and god-only-knows what else; Apple has kept the iPod simple and it’s making them money hand over fist.

But what does the iPod have to do with cellphones? Besides that hideous ROKR thing? That’s simple, literally. By restricting the functionality of the device to the bare minimum, Apple gave consumers exactly what they wanted. While cellphone manufacturers keep throwing function after function into their phones in hopes that more people will plunk down $500 for their latest toy.

All those functions sound great, but really how many people actually use all of them? I cannot speak for everybody, but I would greatly appreciate a cellphone that simply promises:

However from all the adverts I see for cellphones; I have a feeling that is just too much to ask for. *sigh*