Week 05: Cage Without a Key

That’s the thing about depression: A human being can survive almost anything, as long as she sees the end in sight. But depression is so insidious, and it compounds daily, that it’s impossible to ever see the end. The fog is like a cage without a key.

Wait, Week 05? What ever happened to Week 04? Well, my proper camera met with a bit of an accident back on Christmas day and it’s been finally sent in for repairs. It took me a bit to locate my old P&S[1]This is my old Canon PowerShot S500 Digital Elph. It’s a decent camera, though its autofocus is annoyingly slow.. Plus, I’ve just been feeling a bit down of late. When I first realized I’d missed week 04, I planned on posting 2 photos for week 05 to make up for it. Unfortunately, I’ve not been shooting as many images and this was the only halfway decent one of the few I did have. Maybe I’ll post an extra image later in the year to make up to week 04; we’ll just have to wait and see.

Side note: I’ve been working on a new theme for this site and unlike most themes I’ve done this time I plan to do it all from scratch (sort of). I’m using a combination of HTML5 Boilerplate an 960 Grid System to build it, rather than working with an existing WordPress theme. Why? In part because I’ve not worked with HTML5/CSS3 yet and want to and in part because I feel Ian Stewart’s right when he says You should be building your own WordPress Theme Framework. …. Make it your own. When you’re done you’ll have the best WordPress Theme — for you.

Update: Forgot to mention I was also participating in DrawMo, which is like NaNoWrMo but for artists. Well, I was sort of participating. In that I tried to draw something new every day but didn’t quite make it every day (but I did catch up on later days) and I’ve yet to scan/post my sketches for it. *shrug* Oh well.

1 Highly recommend both the soundtrack and the DVD, 5 stars, 2 thumbs up, etc, etc… 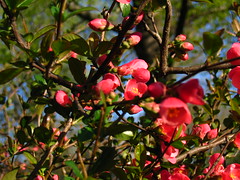 I haven’t felt much like writing anything here of late, but I started to get into the habit of carrying my camera with me everywhere. Since the camera is handy, I’m taking more photos1. When I walked out of the house the other day, the light on this bush in our appealed to me

Like many computer geeks with a passion for photography (and a limited budget) I’ve been lusting for a DSLR camera. Don’t get me wrong, I really like my little Canon Powershot. I just want the ability to use multiple lenses again. Like I could when I was taking photography courses back in college and used my Pentax K1000 SE. That’s a 100% manual, 35mm, SLR. And that thing is rock solid. Heck, my high school art teacher recommended that camera because even a whole school of high school students taking photography classes wasn’t able to destroy them. And with only 1 item in the camera being battery powered (the light meter) you don’t have to worry about running out of juice when you’re taking a photo. Plus it’s total lack of auto-anything forces you to learn how a camera works, which should teach you to take better pictures. The thing is I’m getting older and cannot focus the all manual camera quick enough to get the shots I want. Not to mention, I’m cheap and would rather have digital snaps which I then choose which ones are worth printing out vs. shooting a roll and hoping I got something that the photolab won’t screw up in the processing.

Then today, I’m catching on my the news in my RSS reader when I come across this article from Engadget. Apparently, Pentax is coming out with a new line of DSLR cameras this summer. And the extra kicker is Each camera remains compatible with Pentax K-mount lenses. How sweet is that? I mean I don’t have greatest of lenses for my old Pentax but I love my 17mm lens and to be able to slap that baby on a DSLR? Schweet. 😀

It occured to me that I’d totally forgotten to post pictures from that (now) long ago trip to the Niabi zoo. I have finally posted a few of the images in the gallery. Unfortunately, when I was going through the pictures there were quite a few where my camera’s autofocus had grabbed onto the wrong subject. *sigh*