131: Sweet Dreams Are Made Of This 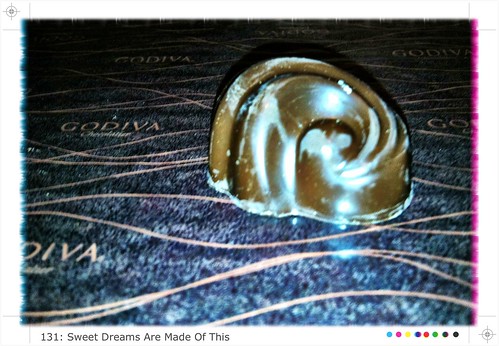 This recipe is based on the Easy Chocolate Covered Cherries recipe from the National Cherry Growers & Industries Foundation. My wife and I spotted the recipe in the December 2007 issue of Everyday Food. We did go for an optional variant of the recipe that they mentioned and increased the size. We made this for a holiday get together with some friends and I have to say: “This was a triumph. I’m making a note here: huge success. It’s hard to overstate my satisfaction.”1

1 Portal rocks!
2 We used Smirnoff’s Twisted Vanilla.
3 Our cherries soaked in the vodka for approximately 12 hours and had a nice zing to them when we ate them.

As previously mentioned, Ariesna & I have been sick for a bit over a week now. So today, instead of taking a “romantic cooking” class through NewPi like we’d been planning; we got a trip to the doctor’s office. Whee…. For extra fun, we each got a Zpak1. I guess that’s a lot better for us than a box of chocolates, but it’s nowhere near as much fun. Still, as I told Ariesna earlier; it’s been a real pill of a day.

As has been noted on this blog multiple times, I use Linux. Specifically, I use SuSE Linux. For my desktop environment, I use KDE. There are several music players available for KDE but the one that is far & away the best is amaroK. It’s got some great organizational tools, a cover manager and can even copy songs to your iPod. It rocks and if you listen to music under Linux; you’re missing out if you’re still using XMMS.

Another thing I like is Magnatune. This is a website that allows you to listen to MP3s of all the albums they offer for sale as CDs, plus they let you podcast with their music without paying for some ridiculous license. They’ve got a wide selection of music (e.g. blues, ambient, rock, medieval, etc…) and when I’m looking for something new to listen to; they’re the first place I go.

In fact tonight, I started poking around their site for some new music when I ran across this post on their founder’s blog:

A few months ago, the developers of amaroK (the amazingly gorgeous music player for Linux and Unix, that really does give iTunes a run for its money) asked me about Magnatune cooperating on their new release of their version 1.3. Their idea was to make a self-booting linux image, that boots into a linux desktop, with amaroK running and some Magnatune music included.