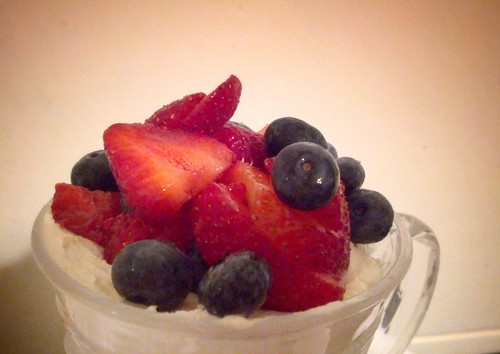 This evening was the annual Burns Supper hosted by H.A.G.G.I.S. We try to attend every year as it’s a fun evening of food, friends and dancing. And like every year, I went elsewhere for my meal, but came back for dessert and dancing. I have tried haggis once and that was an experience that needs no repetition[1]You can basically think of haggis as soupy, liver-flavored oatmeal. I don’t like my oatmeal soupy and just the smell of liver causes me to lose my appetite.. I should mention that the desserts are not part of the catered meal, rather they are all brought by attendees of the supper as a contest to see who can make the best dessert, most traditional and who has the best presentation.

As my wife and I enjoy desserts and there were a couple of trifle recipes we wanted to try out; we decided to both enter this year. Her trifle was based on a black forest cake while mine was a mixture of blackberries, angel food cake and cheesecake pudding. By the I got back to the supper from having real food. the dessert table had been decimated. There was a tiny bit of my wife’s dessert left and only a spoonful of the gooey bits of mine. I ate that little bit of dessert and then had to excuse myself momentarily[2]I think my fettuccine Alfredo didn’t entirely agree with my guts even if it did agree with my tastebuds.. I was just heading back to the hall; when a friend came and got me, telling me that my dessert had won an award.

I have to say, there’s nothing quite like walking into a room full of people all clapping for you. It’s a lovely ego boost and that was my pleasant surprise.

This recipe is based on the Easy Chocolate Covered Cherries recipe from the National Cherry Growers & Industries Foundation. My wife and I spotted the recipe in the December 2007 issue of Everyday Food. We did go for an optional variant of the recipe that they mentioned and increased the size. We made this for a holiday get together with some friends and I have to say: “This was a triumph. I’m making a note here: huge success. It’s hard to overstate my satisfaction.”1

1 Portal rocks!
2 We used Smirnoff’s Twisted Vanilla.
3 Our cherries soaked in the vodka for approximately 12 hours and had a nice zing to them when we ate them.

If so, you better have your towel with you today! As today, is Towel Day.

For those not familiar, Douglas Adams was one of the funniest writers of our time. He wrote a wonderful series of radio plays which were converted in a a series of books and a TV show and later into a really awful movie. This was The Hitchhiker’s Guide to the Galaxy. In this, Mr. Adams wrote:

A towel, it says, is about the most massively useful thing an interstellar hitch hiker can have. Partly it has great practical
value – you can wrap it around you for warmth as you bound across the cold moons of Jaglan Beta; you can lie on it on the brilliant marble-sanded beaches of Santraginus V, inhaling the heady sea vapours; you can sleep under it beneath the stars which shine so redly on the desert world of Kakrafoon; use it to sail a mini raft down the slow heavy river Moth; wet it for use in hand-to-hand-combat; wrap it round your head to ward off noxious fumes or to avoid the gaze of the Ravenous Bugblatter Beast of Traal (a mindboggingly stupid animal, it assumes that if you can’t see it, it can’t see you – daft as a bush, but very ravenous); you can wave your towel in emergencies as a distress signal, and of course dry yourself off with it if it still seems to be clean enough.

More importantly, a towel has immense psychological value. For some reason, if a strag (strag: non-hitch hiker) discovers that a hitch hiker has his towel with him, he will automatically assume that he is also in possession of a toothbrush, face flannel, soap, tin of biscuits, flask, compass, map, ball of string, gnat spray, wet weather gear, space suit etc., etc. Furthermore, the strag will then happily lend the hitch hiker any of these or a dozen other items that the hitch hiker might accidentally have “lost”. What the strag will think is that any man who can hitch the length and breadth of the galaxy, rough it, slum it, struggle against terrible odds, win through, and still knows where his towel is is clearly a man to be reckoned with.

After Mr. Adams’s death some lunatics decided to create Towel Day as a tribute to his genius. I only heard about it this year (about a week ago to be more precise) and decided to join in on the fun. And the fact that I’m telecommuting to work today had absolutely nothing to do with that decision. *grin*

This recipie should yield about 10 servings.

[Editor] This is a recipe Ariesna found online someplace and wants to try making sometime.